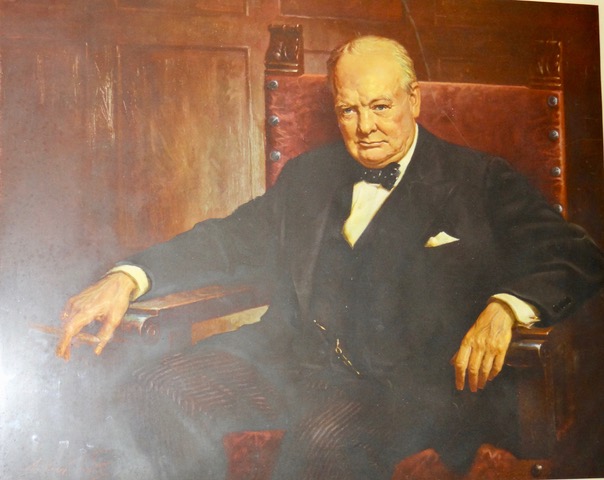 We are neither ducks nor Londoners—

Today is the visual image I have of London—wet, chilly, gray—perfect. We put on our slickers and cross over from Westminster to Pimlico. It’s charming—little shops, restaurants, cafes and people—friendly, nodding as we bang umbrellas, stopping their cars to let us puddle our way across the street. Big hanging baskets of flowers brightening a listless day.

We like it. We check out the restaurant where we’ll have our Sunday lunch today, the traditional roast beef and Yorkshire pudding. Then we find a grocery store but it isn’t open. We’ll come back after lunch. In our ramblings we discover an exquisite pastry boutique—waiting to be tried. But we don’t linger in the wetness of the day and make our way quickly back to the apartment’s snug warmth.

By lunch, the sun is out but we understand hooded raincoats and/or umbrellas are a daily necessity in London. Wading through puddles we make our way back to Grumbles—yes, that’s the name of the restaurant. I’m so glad I made reservations as it’s a tiny hole-in-the-wall place that’s clearly local. There are six tables, three booths, and three outside tables. We are seated at a small table in the corner, affording us a view of both the door and the entire restaurant. Grumbles opened in 1964 and brags about still having the same decor and furniture as when it opened.

We do not have high expectations for the food as everyone has warned us that English food is not a gourmet experience. But still we love the charm, the warm hospitality, and the many small acts of kindnesses that are exchanged between the staff and customers during our lunch. The table closest to the door is occupied by a young woman alone who appears to be quite content to eat her meal and read her electronic book.

The restaurant fills up quickly—all locals. Warm greetings and hugs are exchanged between the staff and their regular customers.

An elderly gentlemen comes in alone. He doesn’t have a reservation. He explains to the hostess he thought perhaps he could slip in early and have a bite before the place got crowded. Oh, how sorry the hostess is to tell him she doesn’t have a place.

As he turns to leave, the woman sitting alone says, “Please sit with me, that’s if you don’t mind company.”

How that small gesture lights up his face, spreading a smile into his weary eyes. “Don’t mind if I do,” he says. A lovely conversation ensues between young and old. We eavesdrop on their histories and storytelling.

Ray’s first course of smoked mackerel is the best dish of the day. It’s the only one with flavor. 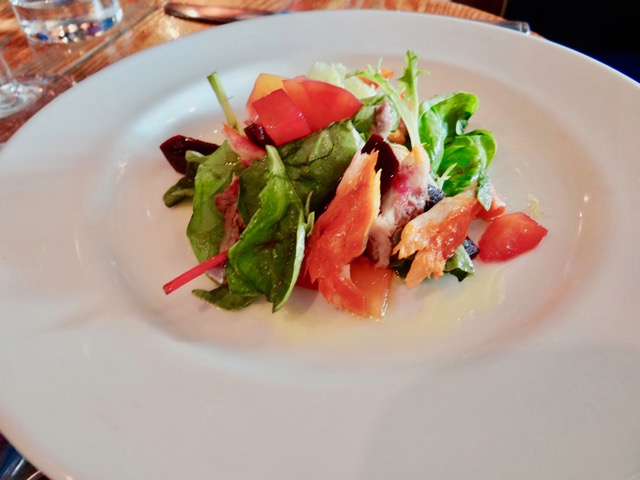 My shrimp cocktail is as bland as anything you can imagine. No salt, no flavoring of any kind, not even in that big glop of dressing. Oh, for a sprig of parsley— 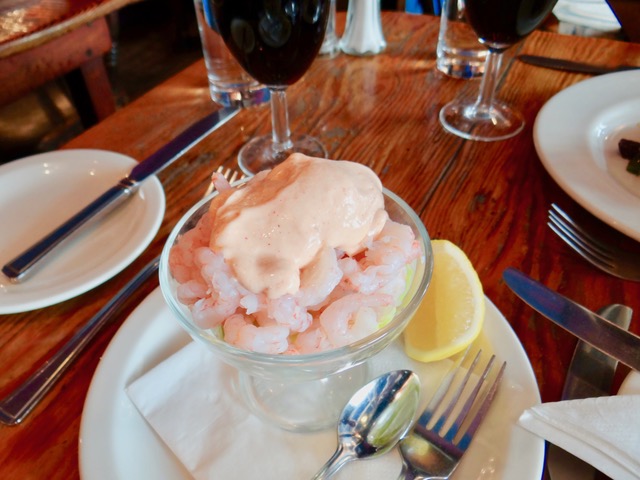 The main course is a handsome plate yet the only decent thing on the it is the Yorkshire pudding. It has just a hint of flavor. Ray never (and I mean never) adds salt to any food he’s served, and he is shaking the salt shaker as often and as hard as he can, hoping something brings life into the food. Roast beef, roasted potatoes, cabbage, carrots and gravy with absolutely zero flavor. It looks so appealing, this traditional Sunday lunch. 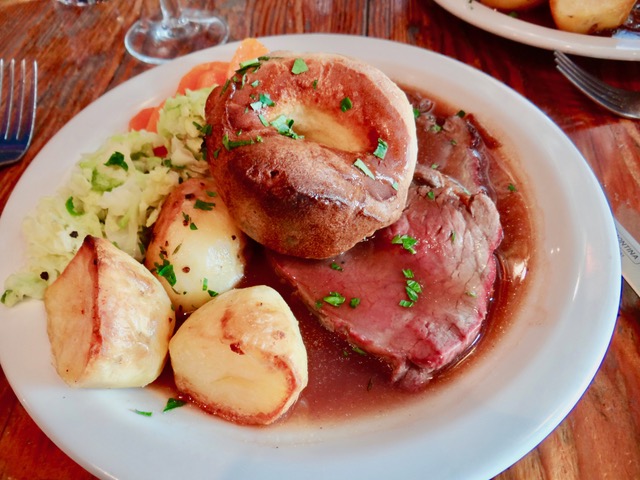 I don’t take a photo of the dessert we share. It’s listed as Creme Brûlée. Instead it’s a thick pudding with a layer of brunt sugar. Ray has an espresso which he says is very good. We each have a glass of Bordeaux and that’s excellent—so the beverages get an A+.

The food was a failure, but we loved the cheery atmosphere and the experience. We have now eaten English food. We will not do it again.

With the sun out, the hanging baskets come to life, nodding their great bursts of color in the breeze. Pimlico is a great little neighborhood. 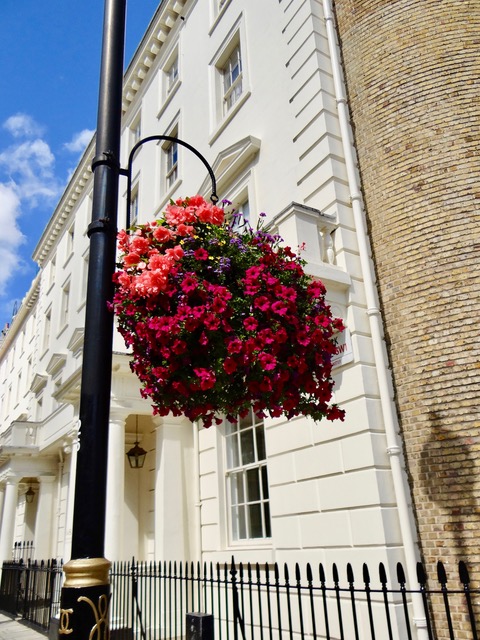 We make a quick walk to the grocery store for fresh fruit, water and wine. We drop our purchases at the apartment and pick up tickets I pre-ordered online for Churchill’s War Rooms. Those of you who’ve met Ray from previous trips know we have to include something on military wherever we travel. As a result I’ve learned much about military history.

We walk the long way on Buckingham Palace Road just to glimpse the palace and walk through St. James Park. It’s a pleasant burst of green surrounded by traffic. It overflows with locals and tourists out for a Sunday stroll.

Having advanced tickets takes us to the front of the line. We get in quickly. But inside it’s packed with tourists. This is the peak of tourist season, but I long for a leisurely stroll through famous places instead of being swept along with the herd.

The Churchill War Rooms were created as an underground bunker that allowed Britain’s leaders to plot the allied route to victory during WWII. Construction of the War Rooms began in 1938. They became fully operational on August 27, 1939, a week before Britain declared war on Germany. The War Rooms remained in operation until the surrender of Japan in August 1945.

The crowds make it difficult to understand what it must have been like to live underground for the duration of the war. The first thing that comes to mind is the ventilation. It isn’t adequate for the number of tourists jammed into the small rooms. I close my eyes and imagine what it would be like to live underground for six years with poor ventilation and no windows—no light. I’m a light person—can’t be without it. Shivers slide down my spine—no light, no fresh air—how would I survive? How did they?

Tiny bedrooms with cots, a desk, a chamber pot, a telephone, one lamp—

During its operational life, the two most important rooms were the Map Room and the Cabinet Room. I took photos but everything is enclosed in glass so the photos only reflected light revealing extremely dirty glass.

The Map Room was in constant use and manned around the clock by officers of the Royal Navy, British Army and the Royal Air Force. These officers were responsible for producing a daily intelligence report for the King, the Prime Minister and the military Chiefs of Staff.

The Cabinet Room wasn’t utilized until Winston Churchill’s appointment as Prime Minister. He declared the room as the one he would direct the war from. One hundred fifteen Cabinet meetings were held in the room with the last one on March 28, 1945 when the German V-weapon bombing campaign ended.

Although both Churchill and his wife had bedrooms at the War Rooms, they rarely slept there. Churchill wanted to be at 10 Downing Street so he could be visible as much as possible.

I was twenty when Churchill died. I remember watching the pageantry on TV and thinking what a remarkable person he was—the right man for a horrendous war—certainly the right man to save Great Britain and alert the rest of the world to the threat Hitler posed to the world. Churchill was a man of great courage and tenacity.

Today, I again watched the film of his funeral. This time I noticed the facial expressions on those gathered—the great sadness, the salute of a child, the bowed head of a soldier. I noticed military pallbearers straining as they mounted the numerous steps to St. Paul’s cathedral, thousands in attendance—the only sound—the click of the soldiers’ heels, the soft thud of the horses’ hooves, the gun salute.

Winston Leonard Spencer-Churchill (1874-1965) an American mother and English father produced a great man, a soldier, a politician, and a writer.

Churchill and his Chiefs of Staff 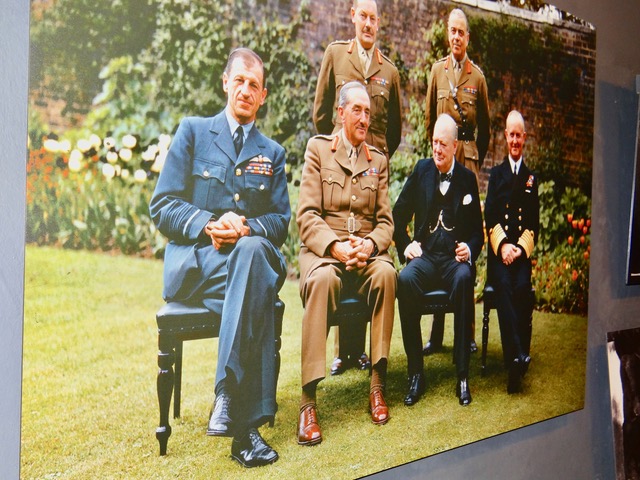 The underground kitchen in the War Rooms 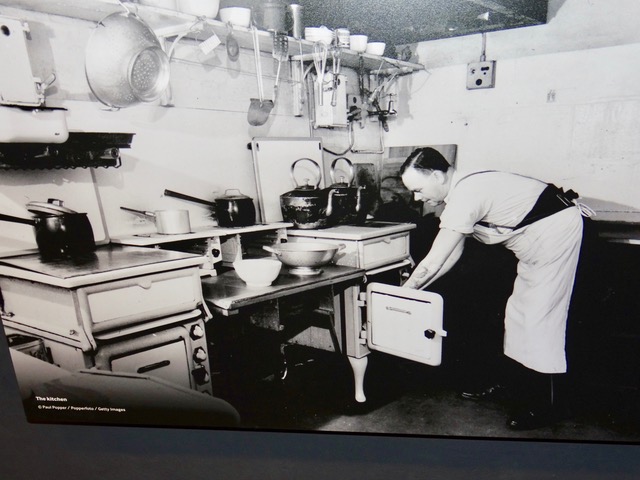 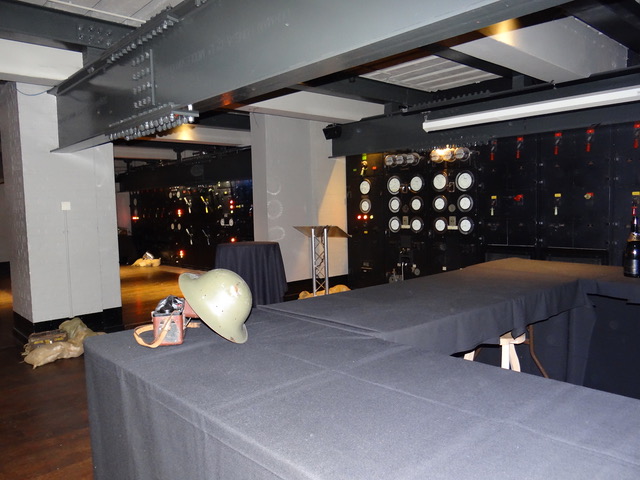 The devastation of London 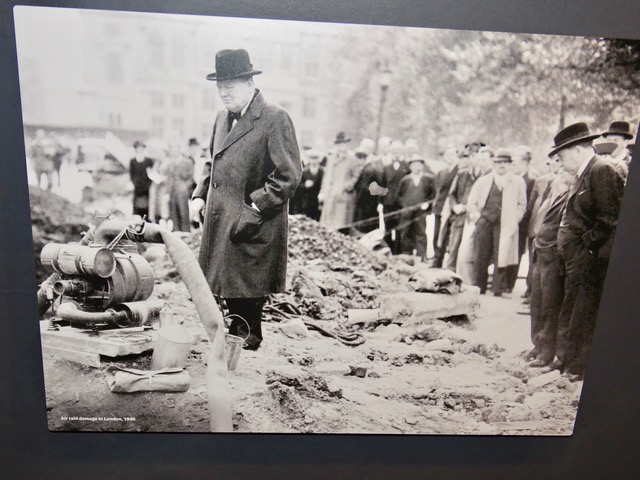 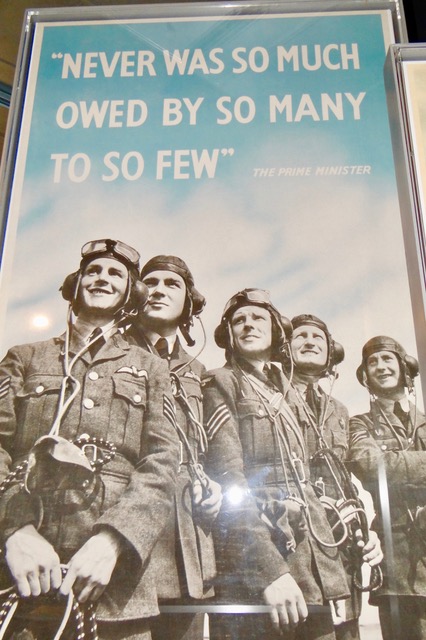 You have enemies? Good. That means you’ve stood up for something, sometime in your life ~ Winston Churchill

The original wooden door at 10 Downing Street was removed after an IRA attack. This is the door that protected Winston Churchill during those war years. 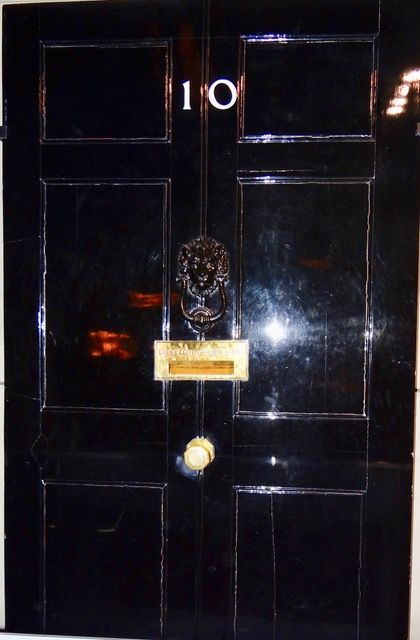 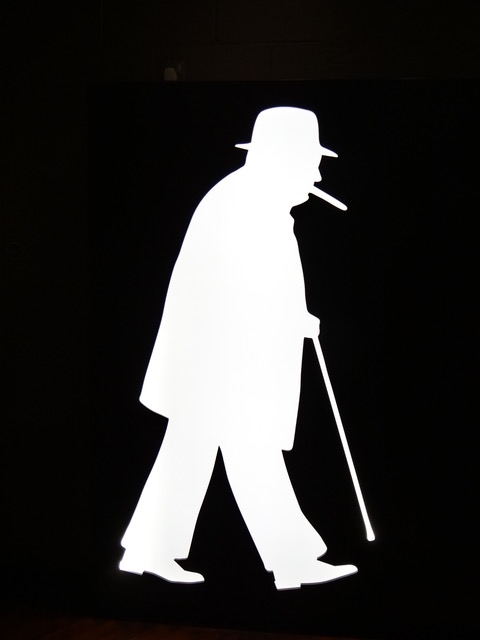 We walk to 10 Downing Street but the crowds taking photos of security guards with big guns and the impossibly high wrought iron fencing don’t allow a view of the #10 door.

Double-decker buses roar pass, endless traffic, more protestors but we manage to stay out of the path of all. We take the short way back to the apartment where a bottle of Primitivo wine, cheese and spicy sausages beckon. 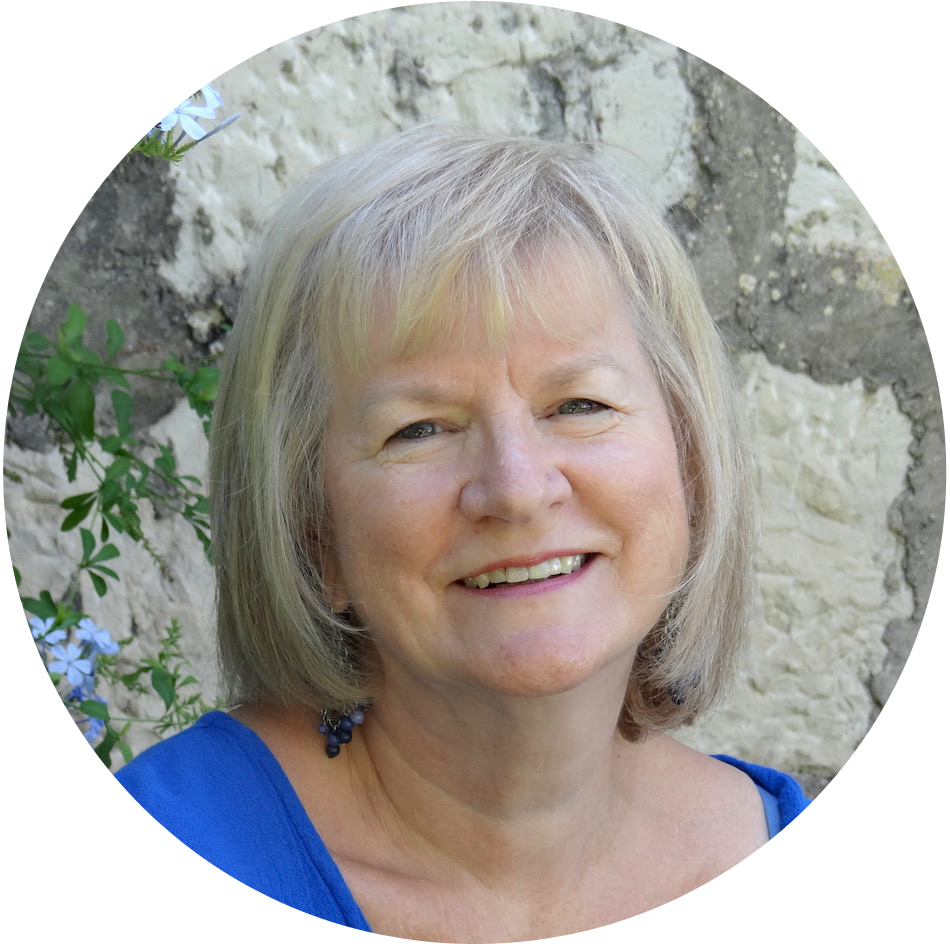 Donna Keel Armer’s first trip to Italy occurred in 1995. She fell in love. While she has traveled extensively in North America, Europe, and Africa, she was compelled to return to Italy over and over. When she found herself alone in a small village in Southern Italy, she put the experience in a email journal to a small group of friends, hoping that one day she’d find the words to share the mystery, the music, the mosaics, the martyrs, and the marvelous food with the world.

"Solo in Salento is a journey of self discovery amid the white washed town of Otranto. There's sumptuous seafood, delicious wine and local hospitality like no other! Solo in Salento will woo you completely and make you dream of visiting the boot of Italy...to experience it all yourself.”

"Solo in Salento is a journey of self discovery amid the white washed town of Otranto. There's sumptuous seafood, delicious wine and local hospitality like no other! Solo in Salento will woo you completely and make you dream of visiting the boot of Italy...to experience it all yourself.”
https://donnaarmer.com/testimonials/ishita-sood/
“Donna gives each reader permission to follow her playful lead… diving into their own hearts, cleaning off who they aren’t, and snuggling up, ever so gracefully, to who they really are.”

Sally Veillette, author of Coming to Your Senses: Soaring With Your Soul and Sicilian Roots

Sally Veillette, author of Coming to Your Senses: Soaring With Your Soul and Sicilian Roots

“Donna gives each reader permission to follow her playful lead… diving into their own hearts, cleaning off who they aren’t, and snuggling up, ever so gracefully, to who they really are.”
https://donnaarmer.com/testimonials/sally-veillette/
“A sassy and sacred memoir for those sorting out what’s most valuable in life.”

Cassandra King Conroy, author of TELL ME A STORY: My life with Pat Conro

Cassandra King Conroy, author of TELL ME A STORY: My life with Pat Conro

“A sassy and sacred memoir for those sorting out what’s most valuable in life.”
https://donnaarmer.com/testimonials/cassandra-king-conroy/
"Solo in Salento: A Memoir is so much more than a book about travel. It’s a touching memoir of self-discovery and renewal. The stunning prose will transport you to the Puglia region of Italy, where you’ll see masterful mosaics and taste Italian delicacies, and be moved by Donna’s personal journey."

"Solo in Salento: A Memoir is so much more than a book about travel. It’s a touching memoir of self-discovery and renewal. The stunning prose will transport you to the Puglia region of Italy, where you’ll see masterful mosaics and taste Italian delicacies, and be moved by Donna’s personal journey."
https://donnaarmer.com/testimonials/test/
“Donna Keel Armer’s gorgeous memoir is an invitation to explore Italy with an artist’s eye, a sommelier’s palate, and a mystic’s heart. Her story – reflective and riotous, intimate and illuminating –bares a bold and vulnerable personal journey of loss, discovery, and epiphany. Don’t miss this book!"

“Donna Keel Armer’s gorgeous memoir is an invitation to explore Italy with an artist’s eye, a sommelier’s palate, and a mystic’s heart. Her story – reflective and riotous, intimate and illuminating –bares a bold and vulnerable personal journey of loss, discovery, and epiphany. Don’t miss this book!"
https://donnaarmer.com/testimonials/rebecca-bruff/
0
0
Donna Armer